The Endocannabinoid System: What Is It & How Does It Work?

In this post, we’ll break down those functions and explain their roles. By the end of this page, you’ll have a working knowledge of the chemistry behind cannabis.

What is the Endocannabinoid System? 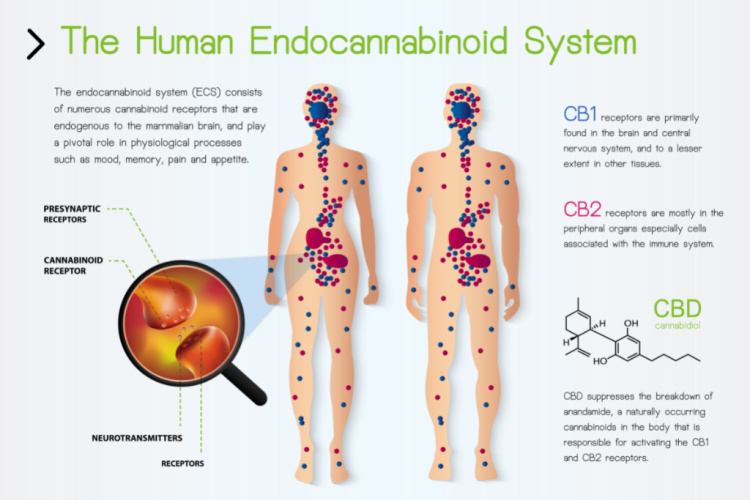 This bodily system is a subsection of the central nervous system (CNS). The endocannabinoid system’s job is to send signals throughout the body. These signals maintain homeostasis, or the unconscious processes that keep you alive. Specifically, the endocannabinoid system deals with immune responses like inflammation. It also plays a part in hunger, sleep, and stress response.

Three main components comprise this system: endocannabinoids, receptors, and enzymes. They each play a role in making sure the endocannabinoid system does its job.

There’s one last interesting thing to note about endocannabinoids. While most neurotransmitters simply trigger an “on/off” response in your brain, endocannabinoids work on a sliding scale. As a result, they can cause a much wider range of responses.

Receptors are the second part of the endocannabinoid system puzzle. So far, scientists have discovered two main endocannabinoid receptors: CB1, which exists throughout the body, and CB2, which are found primarily in the brain.

These receptors’ main job is to bind with endocannabinoids. However, cannabinoids like THC and CBD from marijuana can also bind with receptors, “hacking” them to trigger their normal responses. Remember anandamide, responsible for the runner’s high? Researchers believe that THC may bind to receptors in the same way, tricking the body into triggering the same response.

The endocannabinoid system has its own set of enzymes, separate from the rest of the body. These proteins break down endocannabinoids after the latter binds with receptors. While this may not seem like a big deal, it is.

When enzymes break endocannabinoids down into their constituent parts, your body stores them, ready to recreate them whenever necessary. Without enzymes, the entire endocannabinoid system would break down.

Hacking Your Endocannabinoid System with Cannabis

There you have it: the quick and dirty guide to the endocannabinoid system. This is only a rudimentary breakdown of this complex bodily system, but it will give you a working knowledge of how cannabis functions.
Interested in doing some experiments on yourself (for science, of course)? Look no further than your friendly neighborhood West Hollywood dispensary!

How Long for Edibles to Kick In: the Complete Guide

Interested in edibles? You’re not the only one. Data shows that edibles are one of the most popular ...

Who Was Jack Herer? Meet One of America’s Unsung Heroes of Weed

Have you ever heard the phrases “Hemperor” or “Emperor of Hemp?” If those words left you confused (b...

How Should I Prepare for the First Visit to a Cannabis Dispensary Near Me?

Since California legalized recreational cannabis in 2016, millions of people have passed through dis...